Arriccio and Intonaco are the Italian terms commonly used in describing the make up of fresco supports and merely mean mortar and plaster respectively. The support for a fresco consists of three principal elements, the wall itself, the mortar layer applied to the wall and the plaster layer, which in its turn provides a surface to carry the painting. Lime mortars and lime plasters are used as fresco supports.

Lime itself is made from relatively pure forms of calcium carbonate (e.g. chalk or limestone) burned in a kiln to produce calcium oxide (quicklime). When this is then reacted (slaked) with water it produces calcium hydroxide (hydrated lime). Calcium hydroxide reacts (carbonates) with carbon dioxide in the air to reform calcium carbonate, i.e. the composition of the raw material originally used to make the lime.

Lime mortar is made by mixing sand with slaked lime in proportions of about two to one, although, as we will see below, other materials were also added to modify its properties. Lime plaster is made by mixing slaked lime with ground limestone or marble dust. Lime Plaster is the ideal finish for walls built using lime mortar, and as it is flexible it will tolerate movement in the wall.

The action of carbon dioxide on hydrated lime is the secret to the success of the fresco method of wall painting. The Italian word ‘fresco’ merely means fresh (plaster), if pigments are applied to fresh damp plaster then the colours will be bound to the plaster by the formation of calcium carbonate, this binding can only take place while the plaster is damp and carbon dioxide is able to react with the hydrated lime. Once the pigments are bound to the plaster they will retain much of their brilliance, even for thousands of years, as the surviving painting shows.

In the words of M.Vitruvius Pollio, the Roman 1st.century architect and contemporary of the Emperor Augustus, who states in his famous work De Architectura libri decem.

…..these colours, when they are carefully laid on stucco still wet, do not fade but are permanent

…..so, when the stucco on walls is made as described above, it will have great strength and brilliancy, and an excellence that will last to a great age

The following section is illustrated with photographs of, and samples taken from a loose fragment of painted plaster from the very edge of the lunette, butting up to the ceiling, shown in Figure 1. 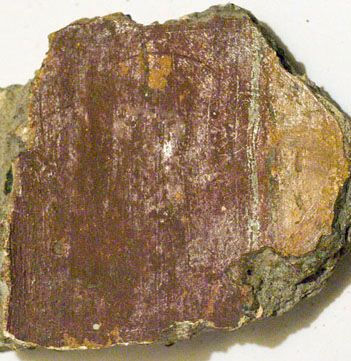 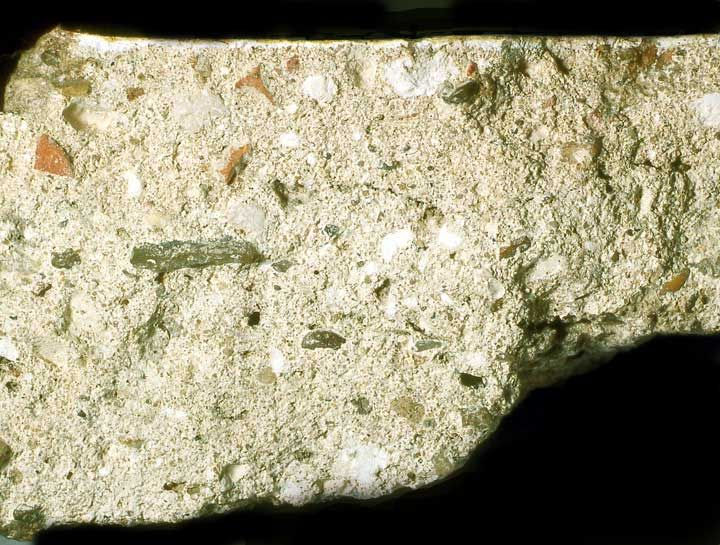 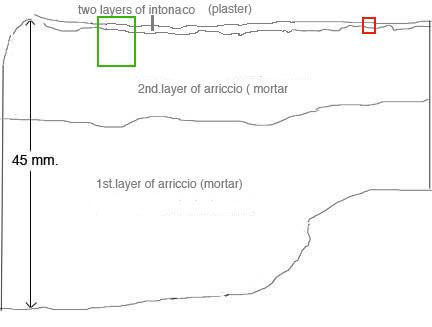 In Figure 2 the side view of a fragment of painted plaster from the edge of the lunette can be seen. Figure 3 illustrates the various layers of plaster and mortar in this fragment.

In Figure 2 it will be seen that the second and final layer of mortar is slightly darker than the first layer of mortar, and has a very faint reddish tinge. Within this second layer layer of mortar there are many small fragments of tile or brick, these were presumably added for the hydraulic qualities they would contribute, making the mortar more resistant to damp, a necessity for the mortar support situated in a bath suite.

The first layer of mortar, some 30 millimetres thick, contains a great deal of sand and gravel, but no tile or brick, it also contains many voids left by vegetable material, mostly straw or grass, this was added when the mortar was prepared in an attempt to prevent shrinkage and cracking of this first layer of mortar while it was setting. 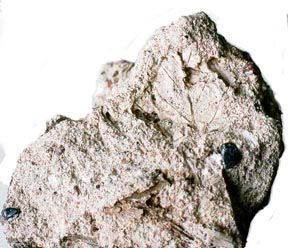 The impression of a small leaf as well as the voids left by grass or straw can be seen in this fragment of first layer mortar from another part of the painting. 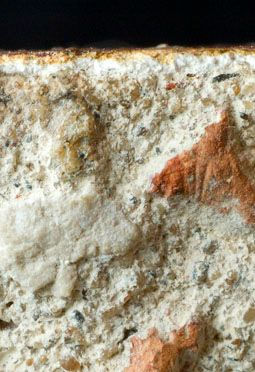 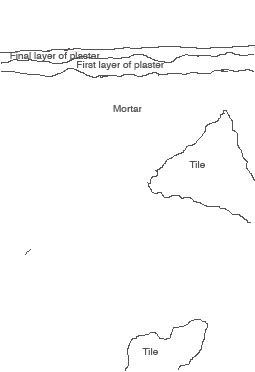 The small area outlined in green in Figure 3 indicates the approximate area covered by Figure 4. a close up photograph clearly showing a section through the first and second layers of plaster and part of the upper portion of the final mortar layer.

The first plaster layer is white, the second and final layer is yellow due to the addition of yellow ochre to the lime plaster. The layout of Figure 4 is shown in Figure 5. 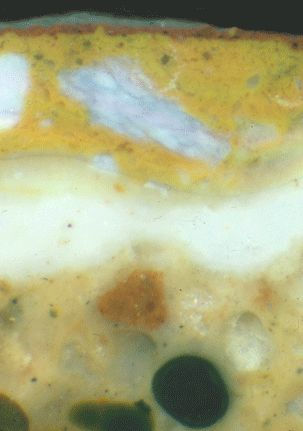 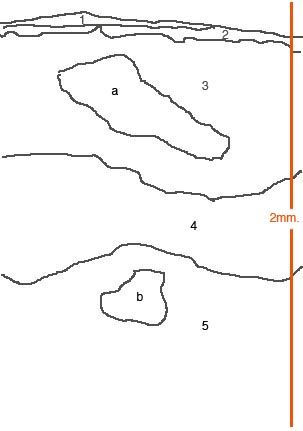 The tiny area outlined in red in figure 3, is shown in a highly magnified polished section in figure 6 with a key in figure 7. This area, some two millimetres high, is a section through the layers of paint, plaster and the very edge of the final layer of mortar.

Layers 1 and 2 are layers of paint, layer 1 is blue frit, or Puteoli blue on top of layer 2, a dark red ochre. The area shown in the polished section can be seen in figure 1 to the right hand side of the fragment where a line of pale blue paint borders the red ochre area and separating it from the yellow ochre.

Layer 3 is the yellow ochre plaster layer on top of layer 4 of white plaster Layer 5 shows the final layer of mortar.

A calcite crystal is seen at ‘a‘, one of a number in the section, is embedded in the final layer of yellow plaster, Professor Roger Ling has pointed out in his work ‘Roman Painting, 1991‘, page 204, that the presence of calcite crystals in this way may be deliberate rather than accidental in attempt to improve the brilliance of the burnished plasters lustre.